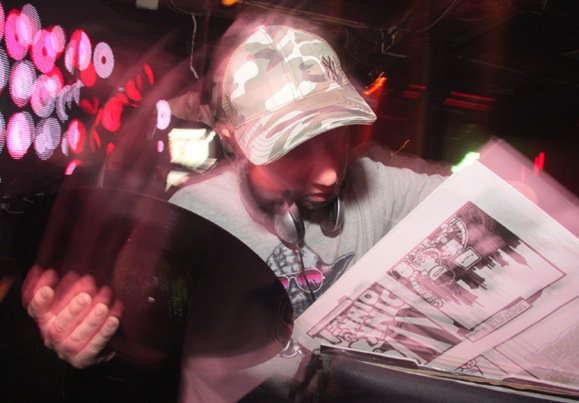 The Transmit Sessions are all about musical origins, explorations and boundaries. This weeks guest mix, courtesy of Bass Camp head honcho Ken Evil, touches them all. It’s probably the most exciting mix so far and the selector took a minute to speak to the Robot Bodypop:

1. Tell us about the Drum Music collective you’re involved in

A. Drum Music has been running for over 7 years now and is primarily a collection of DJs, producers and live musicians all living in the Manchester area. We’ve been putting on monthly events in various venues across Manchester since January 2005 when Grandmaster Rufmouth kicked it all off. The event features an eclectic selection of residents tracing the history of dance music right back to it’s roots in live African drumming. We always feature a live set from from MCR premiere African drumming ensemble Tanante and used to have a couple of resident human beatboxers at one time. From time to time we’ve had guest DJs and live acts but at the moment we’re looking for a new home

2. Whats your most memorable night at Bass Camp?

A. There’s been a lot of events I’ve put on that I’m very proud of and it’s hard to pick just one but I guess the Deep Medi night Bass Camp co-hosted with Exodus from Leeds at K2. We had the entire Neuron Pro-Audio Void sound system set up for that one and the whole building was vibratring. We had Mala, Quest, Bass Camp regular Hijak, V.I.V.E.K on his first outing to Manchester, Exodus b2b with myself and the legendary Sgt Pokes and Subliminal on the mic. Mala enjoyed it so much he gave back most of his fee!!

3. How do you feel about how close knit the Manchester community is and why do you think Manchester continues to pump out quality producers and artists?

A. Manchester is a small city and everyone does know everyone, I like that about the place. If you go out regularly to good underground events you very easily end up getting to know people involved in the scene, ideas are exchanged and people colaborate and influence one another. I met MAKO who I’ve been working on some productions with that way. It’s a city with a positive vibe and that comes out in the music I think.

4. Do you feel its important for musicians to keep in touch with fans and followers?

A. I think so, it always impresses me when people like Mala and Chicago’s Juke don Rashad take the time to stay in contact with me. People have busy lives and just staying in touch with friends can be hard enough. It’s nice to be nice.

5. What plans do you have for the future with your events?

A. Well, as a collective Drum Music has just been heavily involved with the Stumblefunk stage at Beatherder this year but I think we all deserve a little holiday after that. A lot of fun but a lot of work. Bass Camp represented too with Djinn and myself playing the final set b2b on Saturday night immediately after Goldie. Man like Kwasi Asante blessed the mic for that one too, I think there’s footage knocking about. September onwards we should have a new home for Drum Music but I think Bass Camp is gonna stay on ice for a while yet.

6. Tell us about some producers we should be looking out for.

A. The producers I’m most excited about at the moment are all coming from over the other side of the pond. People like DJ Rashad, DJ Spinn, DJ Nate & DJ Roc from Chicago and Machinedrum from New York. They’re all smashing it in a Juke 160bpm style right now. I’m also really getting into the Moombahton sound and really digging everything I’ve heard from Munchi, from the Dominican Republic but can’t find any vinyl though which is a shame as I pretty much exclusively play out on that.

7. Whats your favourite track in your collection and why?

A. I don’t have a favourite piece of vinyl but I do have a most priced and precious piece; the only dubplate that exists of the original version of ‘Kingdom of Zion b/w Ghost of Frankensine’ by the late great DJ Sine (founder of Tanante, co-founder of Stumblefunk Sound System and Drum Music Collective original member)

8. Tell us about your particular music journey from what you started listening to to where you are now.

A. How far do you want to go back?

A. I go back a long long way (I’m old in other words)? DJing-wise I started out as a Drum and Bass selector then got into UK Garage and followed the evolution of that sound into Grime and ultimately Dubstep. I’ve always liked tunes that move you and was into some really heavy and dark bands like the Butthole Surfers, Bogshed and Bad Brains back in my late teens and early twenties. There’s so much other stuff I like I could go for ever from Josef K, Ball and Shockabilly to Jeff Buckley to Bowie to Radiohead to The Police to Throwing Muses to Bongwater to Soundgarden etc etc. The late great John Peel was a massive influence on my musical taste in my formative years.

9. Will you be producing more in the future?

A.Yes, with Alex Mako, getting right back on that one soooon

10. Whats the biggest animal you can throw over a crossbar?